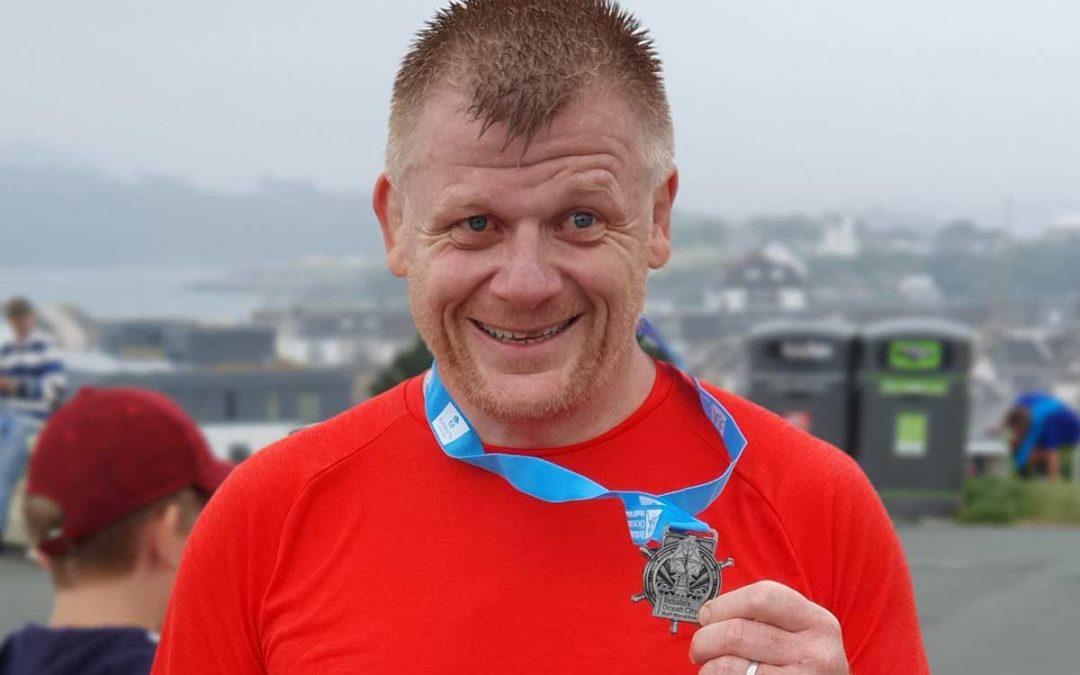 The belated half marathon took place on Sunday 5th September and was taken on by Fay Pedler Physiotherapists Aimee, Alex and Tom, alongside Sports Therapist and all-round massage-guy Ross.  The team helped to raise money for local charity Luna’s Fund which provides support for bereaved parents.  Traditionally the 13.2mile road race takes place in May however due to the global pandemic and associated restrictions this year’s event was rescheduled.  My own preparations were interrupted due to a last-minute holiday and associated pastries, chocolate and wine excesses!

On race day the Hoe was filled with runners, supporters and volunteers creating a positive vibrant atmosphere filled with hope not witnessed since the beginning of the pandemic.  A minute’s silence held to remember those who lost their lives in Keyham was well observed with many runners showing further respect through wearing an item of green. Perfect weather conditions of dry and warm with the 8:15am start allowed the majority of runners to complete the course before the day became too hot.

Following a few last-minute stretches, we were ready for the off. Heading away from the Hoe, through side roads, passing around the Duke of Cornwall to head up Royal Parade, a small crowd gathered to offer encouragement.  The first three miles were relatively flat heading down Gdynia way and up the embankment for a mile or so before turning back.  The race leader was way out on his own as he passed the majority of runners on the opposite side of the road.  The pace was faster than anticipated or required for me, carrying some extra holiday weight and low on training miles.  This was either going to be an unexpected good time overall or at some point in the next 90minutes, the wheels would fall off and I would be in a whole world of trouble.

Heading out towards Plymstock along Billacombe Road, the undulating course and distance started to pick off the runners and spread the field out.  Many spectators out on the course offered Jelly Babies and water with enthusiastic encouragement that you were actually doing well despite feeling awful!  Into Saltram and at the part of the course that is closest to home.  I resisted the temptation and resolved to plod on and out of the shade of Saltram down the Ride and over Laira bridge once more.  My pace had predictably slowed and runners were passing frequently looking strong, fresh and energetic.  I regretted that extra holiday pastry now or was it the fast(ish) start? Legs were tired and sore, left leg was tight provoking knee pain, feet were sore and now the cobbles of the Barbican were underfoot with the last 200 meters of the race uphill back onto the Hoe.  This bit of the course hurt!  I desperately wanted to stop through sheer exhaustion (the pace had well and truly caught up with me) however the throngs of spectators kept me going.  My family are on the finishing straight so I put on a brave face in hope that they may be encouraged to join me one day.  After all running is good for your health!

I crossed the finish line with no hint of a sprint, happy to stop and walk, achieving a respectable time given the circumstances.  I collect a T-Shirt and medal for my efforts, join the family and head off for a day of self-inflicted aches and pain reflecting on a job well done.

The Fay Pedler team all completed the course in under two hours and celebrated with a well-deserved roast, wine and early night.  Training begins for next year!